Karma Parenting and the Eating Habits of a Picky Two-Year-Old (Uxbridge Cosmos Apr. 2013) 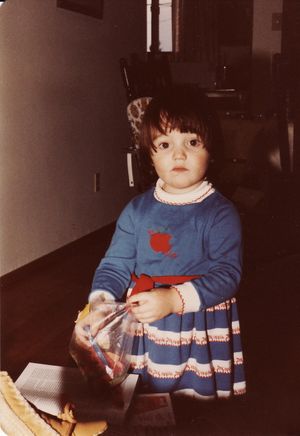 "I would do anything for cheese, but I won't eat that."

I am currently sitting in a sticky, tangled, Karmic web of my own doing. In my limited experience as a mother, I find that much of parenting has a lot to do with Karma. It’s the what-goes-around-comes-around experience made up of all the horrible things you did to you own parents as a kid. That is, if you threw tantrums in the middle of the high street as a toddler, your kids will throw a hymn book across the pews in church protesting your new TV-watching restrictions. If you coloured on the walls of your parents’ Victorian walk-up in permanent marker, your five-year-old will paint the F-word on your designer leather recliner in orange nail polish. If you pooped in the tub every other day until you were six, your eight-year-old will sing the Diarrhea Song at full voice to all the mourners at your grandmother’s funeral. In my own case, my current Karmic challenge is the eating habits of my two-year-old.

As a kid – even though my mother is a FABulous cook - I was a very picky eater. I didn’t like cold food, I didn’t like hot vegetables. I didn’t like grainy bread, I only wanted white, squishy dinner rolls. I loved bananas and then very quickly HATED bananas. I refused to eat seafood and filled up on chips and dip at family gatherings, making dinner much more infuriating and embarrassing for my poor parents. Honestly, it’s a wonder that A) I don’t have scurvy or have grown over three feet tall, and B) that my parents aren’t living in adjoining padded rooms in Whitby.

So, here I am, 30-some-odd years later, with my own toddler who refuses to eat anything that isn’t French fries or covered in Parmesan cheese. Yes, mum and dad, you may now sit down in the front row of “Ha-Ha-Ha-So-There” and slowly, sarcastically applaud, point, or throw things for I truly had this coming.

I’m sure we all know at least one kid growing up that really did live on peanut butter sandwiches and hotdogs and is now an Olympic rower or diver or underwear model. Yeah, you know… that guy. But more often than not, we’re told about the rising childhood obesity rates in Canada, about the dangers of over-exposing our children to fat, salt, sugar and high fructose corn syrup. We’re painfully aware of the need for and general lack of our five daily servings of fruits and veggies. And so, I suppose it’s only natural that when our children gag when served string beans or dump our steamed carrots on the hardwood floor, we panic. Let me elaborate with a quote by American stand-up comedian and actor Louis CK that a writer-friend sent me on the issue of picky eaters. He clearly crystalizes why we tend to go mental when our children won’t eat (and bear in mind, I’ve censored a few hundred F-bombs here and there to make this quote family friendly, so just imagine them in there for the full impact.)

“When your kid won’t eat, you just go crazy, because you have a physical need to feed them, it’s an instinct. And when they’re sittin’ there, just lookin’ at their food, you’re like…Just EAT it! You’ll die, you idiot! Eat the food!... ‘I don’t like it’… It DOESN’T MATTER, put it in your face! They have your footprint at the hospital; they know that I have you. I’m not allowed to let you die… EAT IT! You have a social security number; you’re on the grid…. EAT! If you’re skinny I go to jail, do you understand?!”

He’s right. Again – as mentioned in my previous Cosmos column about Google and the age of information – we are now, more than ever, armed with so much “knowledge” about health and nutrition that when our kids won’t ingest anything green and organic we are certain that they will perish within the next month or so of malnutrition. So, what are we to do? Well, when faced with yet another Nutella-on-toast dinner special, I did what most 30-something Facebook users do, I polled my friends online to see if anyone had any suggestions with this delicate plea: “Rrrrrraaaaaagghhhhh! This kid will eat nothing!”

At first I was reassured to know that I truly wasn’t alone; so many of my friends have been through or are currently enduring the challenges of difficult eaters. One friend suggested that maybe his palette was highly sophisticated, joking, “Maybe he wants caviar... with some Grey Poupon.” Others advised convincing him that “yes, it’s a cookie,” no matter whether it was broccoli, pasta, or an olive. Many forwarded recipes that were, in effect, ways to disguise vegetables in every day snacks and meals. Another parent said he likes to break the ice of mealtime with a cookie, but then admitted, “that's bad parenting. Sometimes I let him have popcorn for dinner. Also bad advice.” And many reassured me through various old sayings (hunger makes a good sauce) that he will, in fact, eat if he is truly hungry and to try not to pander to his every dining whim.

I continue to deal with this issue and like most of my hurdles as a mom (nursing, sleep-training, walking, licking random things) - though I’ve gathered much advice from books and other parents - my hubby and my difficult eater and I are sort of wading our way through it, discovering how to deal with it as we go along. My strategy includes trying to lead by example and eat well in front of him and with him; continuing to offer him things that he hates (even though he looks me straight in the eye and chews broadly, spitting out whatever I’ve lovingly prepared for him into his bib); and though I haven’t done much of it yet, I endeavor to prepare him meals with foods that I hated as a kid and continue to hate as a picky adult, if only to break the vicious eating cycle for his own children some day. But in the end, I wickedly kinda want to get that call, 30 years in the future from my exasperated son whose own toddler won’t eat the meal he just made. I’d like to die laughing.