Go ahead. Laugh. Please, it would make me feel a little less filthy.

I never thought I would do it. I guffawed snobbishly at those who had done it. But before I could back out, at the ripe age of 26, I, Whitney Ross-Barris, auditioned for Canadian idol.

I’m not sure why I decided to. It was definitely against my better judgment. Most reality TV gives me reflux. During its initial popularity, I watched, helpless as roles for actual actors dried up and the entertainment industry was flooded with “real life” dramas. Hey, I’m all for documentary, but when the definition of “real life” mutates into orange-skinned, hair-extensioned, white-toothed models making out in hot tubs in pursuit of true love, I’d rather eat hot dog-sick than watch one torturous second of this soft-core side-show they call reality TV.

Having said that… about four years ago, I found myself waiting in the misty rain of a strip mall in Kitchener, Ontario at 7 in the morning on a weekend. I was around the eightieth-or-so person in line when I realized that the age range seemed at little broad for the contest I was about to enter into. In front of me was a long, snaking line of middle-aged suburbanites in skidoo jackets chuckling over Tim Horton’s cups and the latest cute thing their sister’s kid did. Only after questioning the nearest friendly soccer mom did I realize that I was actually in line to receive a subsidized rain barrel from the city of Kitchener-Waterloo. I weighed my options and though a rain barrel was tempting, I could see that it wouldn’t propel me onto the Canadian music scene as quickly as the other line-up might.

I approached the actual Canadian Idol audition line-up and immediately felt like this: 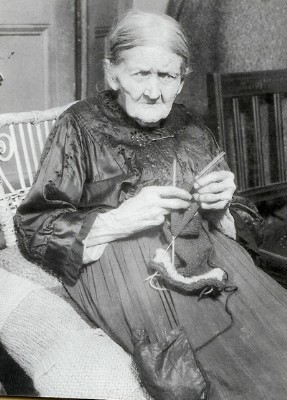 next to a thousand hyper sixteen-year-olds, armed with guitars and lip gloss. I found the sign up desk, lied about my weight and height and promptly hid behind my copy of Memoirs of a Geisha on the nearest food-court bench. The wait would be lengthy and somewhat excruciating. Cameras and crew raced up and down the line up, scanning the crowd and riling up the screaming teenagers. In those moments I wished I had brought a larger purse into which I would then climb and hide until my turn came. Instead I blushed and gravitated to others that also pushed the age limit.

I wasn’t sure how to feel other than immediately regretful. I was surrounded by the limitless energy of boisterous contestants who had all brought their best friends/parents. There were pert little pretty girls, pale and sadly delusional basement dwellers, pre-pubescent skater boys with battered acoustic guitars and then the veritable grannies, like me. They were all desperate to be heard and so played or screeched their songs out for anyone who would – or wouldn’t - listen.

Eventually I was herded from this heaving, giggling crowd into a smaller waiting area, then with an even smaller, very dry-mouthed, and sweaty-palmed group into a trailer in the parking lot. Inside the trailer, the walls were covered with wood paneling and the trailer itself smelled of desperation and cold coffee. I felt like I was in one of those creepy Calvin Klein ads from the 90’s. The seven of us (that is, the Brady bunch and me, Alice) stood, leaned and teetered in front of a weary but somewhat hot young producer who sat behind a table at the other end of the trailer. It felt like an interrogation. I told an incredibly embarrassing story about myself – naturally – sang my songs and got the hell out.

Were we successful, the contestants then moved on to yet another trailer. I was, and so I did. Alone inside this time, I faced another judge, disappointingly less charming and attractive as the last judge and nervously performed my songs (I had chosen my favourite blues tune “I Need Your Love So Bad” and then for the kids at home, an Alicia Keys hit) and left with a ticket to move on to the… wait for it… ‘Celebrity Judges.’

So, after begging my boss for the day off, I returned two days later to the bustling metropolis of Kitchener for my BIG audition. I got there REALLY early – again 7a.m. I figured I would get in and out as fast as possible and be home in time for dinner (well, I was 26, so… home in time for cereal and falling asleep in front of Sex in the City reruns on TV.) As it turned out, I was wrong. I ended up having to wait in a theatre lobby until 5p.m. to sing two of the five songs I was asked to learn. That ten hours of complete insanity was filled with me slowly losing my will to live as a young man dressed as Elvis pelted me with shifty-eyed awkwardness. I kept wondering where the hidden camera was.

When I finally got in to the auditioning space – a yawning chasm of an amphitheatre, packed with cameras, lights, an exhausted crew and of course, the ‘Celebrity Judges’ - I was asked a number of questions. I talked about my day job, hosting in a fine-dining establishment that the judges all frequented at the time; I was prompted to give them my best Borat impersonation, to defend my choice of artistic career and of course I was asked to sing. After a day of not knowing when I would be called in, trying to keep warm for hours, trying to shut out another rousing rendition of “Jailhouse Rock” and enduring the nauseating presence of Ben Mulroney, I cacked. Terribly.

The antagonist judge asked me when I was going to give up the ghost. In fact, the dialogue went something like this:

Antagonist Judge: So, you’re an actress too?

Me: (with pride at my double-threatedness) Yes.

AJ: You done anything big?

Me: (deflated) Uh. Well, no. Probably nothing you’ve ever heard of.

AJ: Right. (sigh) So what happens when you’re a 32-year old singing hostess?

AJ: What happens when you’re a 32-year old singing hostess? I mean, when do you throw in the towel?

Me: (verbal diarrhea) Well… I uh… I move to (insert name of rural Ontario town with day care in high school) with my five kids and alcoholic husband and I go to the local sports bar once a week to boogie with my cougar girlfriends and… maybe I’ll see you there, Jackass!

Well, I didn’t say ‘Jackass’, but I wanted to. Then Farley Flex told me that my voice wasn’t strong enough for the competition that they had in mind and I cried all the way home along the 401.

What I learned from this: I should have stayed in the rain barrel line. Also... Kitchener did give me my first ever union gig as an actor, so Karma, paid in full.