I’m getting old. It’s official. I apologize for that statement, as I know that some of you will be thinking, “I remember eleven-year-old Whitney playing “Fagin” in Oliver! at Uxbridge Public School…So, how old does that make ME?” Listen, once we’re past our ridiculous 20s I think, we’re all entitled to feel a little old sometimes. I have two young children. I’ve earned at least a tiny share of smug-old-person scowling and self-righteousness. Currently, there is a growing population of 20-something hipsters in my city and while I used to admire their originality, I’ve come to realize that many of them are really just annoying young people.

Not long ago, I popped into a popular neighbourhood espresso bar that I had passed numerous times on the street to get what was touted in local press as being a REALLY good cup of coffee. Upon entering, I was assaulted by music at a decibel level that was just too loud for my liking, thank-you-very-much (see what I mean? Next stop, angry-fist-shaking at ‘those darn neighbourhood kids’ from my front porch.) Honestly, I don’t know if you could call this soundtrack “music.” At first I thought maybe I was missing something. Literally, I thought that maybe there was some sound level or tone that only those under 25 could hear. What I could hear sounded like the bridge of the Starship Enterprise, a seemingly random spatter of bleeps and pings over a low drone with a depressed-sounding melody sung by a woman (?) who, I’m pretty sure, was standing in a wet cave at low tide. Before I could be dragged out to sea, I remembered why I had gone in to the shop in the first place. Good coffee, dammit!

I determinedly approached the barista (that’s Coffee-Snob for “Soda Jerk”) and before I could order my cuppa, I was mesmerized by his get-up. The DIY-restyled t-shirt he was wearing – which I heard his colleague compliment – was one that I remember getting for free in about 1990 for the Jump Rope for Heart Campaign. This barista was likely no more than a zygote when I was collecting pledges and jumping rope like a maniac in my school gymnasium. You see, he wasn’t even wearing the shirt ironically from his own youth… he was wearing the shirt as a – oh dear God – VINTAGE PIECE!

Then there was his beard. I should’ve known there’d be a bunch of fancy beards in this place. On any given day, there is an impressive tangle of expensive, minimalist bicycles hitched up to the patio railings outside. That’s always a good indication that the beard count inside an establishment is high. There was a time, that a man with a fancy beard was a fashionable and responsible member of Victorian or Edwardian society – a royal, a businessman, a founding father, an Arctic explorer. Then there was another time when beards were a defiant statement of the exact opposite, telling “the man” to shove his razors and square sensibilities. And yet another time came when those men still sporting beards were a bit creepy…or they were Grizzly Adams. It seems now we’ve entered a kind of neo-Fancy Beard era when it’s all very confusing because well-manicured beards have become an extravagant accessory of fashionable, hipsters who don’t care what you think (but they kinda do because that lavender-scented beard oil was 35 dollars at Holts.)
But Coffee! Coffee, Whitney!

“I’d like a large, medium roast coffee, please?” I felt the order was sufficiently complicated and patted myself on the back for at least knowing what colour roast I was interested in. The bearded-barista smiled perkily.

“We don’t have actual drip, just Espresso. Do you want an Americano?”
WHAT DOES THAT EVEN MEAN?! I want el-Canadiano. A hotto coffee-o in a cuppo!

“A double or single shot?”

Yes please, I thought. Both. At once. Then I realized he was talking about espresso and not whiskey.

I really should’ve just given up, thrown up my withered hands and run weeping from the shop, but the blood in my veins was so devoid of caffeine that it was now making the decisions, without the input of my brain.

“Mm-hmm,” I confirmed with an awkward, helter-skelter smile.

And then I shuffled to the end of the counter and got lost in the curated collection of awkward, waxy, dark and ambiguous coffee-shop paintings. It was probably at least a minute and a half of cave-singing and angry, weeping wax art before I realized my Americano was up.

I thanked the sleeveless, rope-jumping barista and walked out into the unforgiving light of late morning, defeated…until I drank my absolutely stellar Amerciano and felt reborn…then I realized I’d have to go back into that womb of vengeful youth if I wanted to ever get another one. Oh God. Tea anyone? 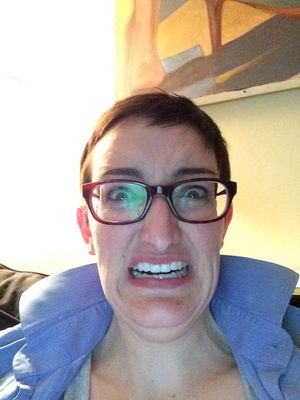 My horrific realization that 1994 was more than 20 years ago